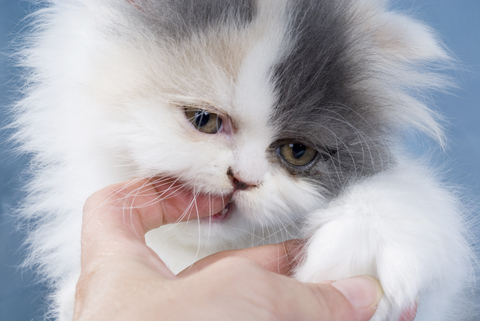 What are the most common compulsive disorders in cats?

In cats, excessive sucking and chewing, hunting and pouncing at unseen prey, running and chasing, paw shaking, freezing, excessive vocalization, self-directed aggression such as tail chasing or foot chewing, overgrooming or barbering of hair and possibly feline hyperesthesia may all be manifestations of conflict, and may become compulsive disorders in time. There may be a genetic predisposition to compulsive behaviors. For example, wool sucking is more common in Oriental breeds of cats.

The diagnosis begins by ruling out or treating possible underlying medical causes. Since a variety of medical problems, including painful conditions, neurologic diseases and dermatologic disorders can cause many of these signs; an extensive diagnostic workup may be needed to rule out underlying medical problems. In cases where the cat is exhibiting self-directed or self-injurious behaviors such as tail mutilation or psychogenic alopecia (see below), a dermatology work-up might include diagnostic tests on the blood and skin, as well as perhaps medication or diet trials to rule out food allergies, parasites, itchiness, or pain. If the problem is diagnosed as a compulsive disorder, drugs that inhibit the reuptake of serotonin may be effective at reducing or controlling some of the signs; at the same time, behavior therapy and environmental modifications are also likely to be needed. These include (a) providing a predictable daily routine; (b) providing a reward-based training approach that shapes desirable responses and avoids the use of punishment; (c) avoiding the use of rewards except when desirable behaviors are exhibited, so that the pet learns what behaviors earn rewards; (d) providing a few regularly scheduled social interaction sessions (including social play, exercise and training); and (e) between social interaction sessions, providing a settle down area for rest and relaxation and stimulating object play toys that use food and textures to maintain interest.

What is feline psychogenic alopecia?

Alopecia or hair loss can result when cats over-groom and remove fur. Overgrooming can take the form of excessive licking or the pulling out of tufts of hair. The diagnosis of psychogenic alopecia as a compulsive disorderis reserved for those cases in which no underlying medical problem is evident. Most cats with alopecia have an underlying skin disorder such as fleas or other external parasites, flea bite hypersensitivity, inhalant allergies, food allergies, infections or dysfunction of internal organs or the endocrine system. A steroid trial and an 8-week or longer food trial (with a novel antigen or hydrolyzed protein diet) may often be recommended before considering the diagnosis to be purely behavioral.

"The diagnosis of psychogenic alopecia as a
compulsive disorder is reserved for those cases
in which no underlying medical problem is evident."

Cats normally are fastidious groomers, and as much as 30% to 50% of the time they are awake is spent performing some type of grooming behavior. As with other compulsive disorders, feline psychogenic alopecia may begin as a displacement behavior arising from situations of conflict, frustration or anxiety, but might in time become compulsive.

Increasing interactive play with owners (chase toys, training) and increasing environmental stimulation (play centers, chew toys, food or catnip-packed toys, kitty videos) should both be added to help calm, settle and occupy the cat. In order to keep toys novel and enticing, they should be varied from day to day and removed when the cat is finished with play. Food-filled and treat-filled toys and those that can be batted or chased seemed to be the most enticing. In addition, cardboard boxes, paper bags and new climbing and perching areas can help to increase stimulation when the owner is not available to interact. When the owner is at home, providing social play with toys that can be batted or chased, as well as some basic food reward training exercises can help to keep the cat occupied and focused.

"Attention should never be given to the
cat when the compulsive behavior is exhibited." 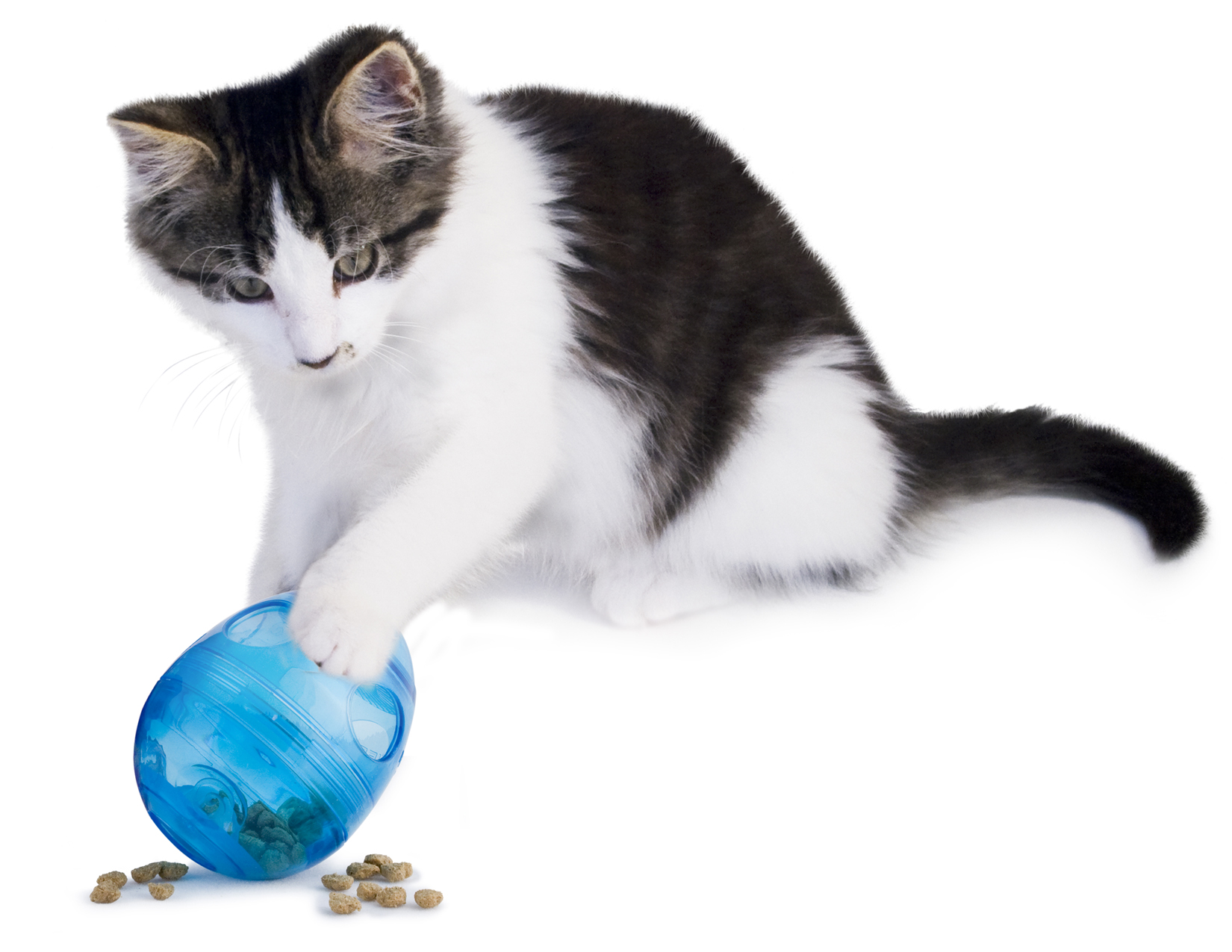 By adding more regular sessions of social and object play, the cat should be more relaxed and less likely to chew or overgroom between sessions. Attention should never be given to the cat when the compulsive behavior is exhibited. In fact, inattention or some form of remote punishment device may be the best way to ensure that no rewards are given. Remote devices such as a water rifle, a can of compressed air, or an ultrasonic or audible alarm may serve to interrupt or deter the undesirable behavior without causing fear of the owner. As soon as the undesirable behavior ceases, the owner should immediately engage the cat in an alternative acceptable behavior (e.g., play, chew toys). The owner should also try to identify environmental or social changes that may be contributing to anxiety and the behavior. If a source of stress or conflict can be identified (as in relationships with owners or other cats) then a specific program to resolve these problems may need to be implemented. If the over grooming is induced by conflict or anxiety, treatment with antihistamines, anxiolytic drugs, or Feliway® may be useful, but for compulsive disorders serotonin reuptake inhibitors such as clomipramine or fluoxetine will likely be required. In some cases, allowing the cat some quiet time away from other household animals may be needed if conflicts between cats cannot be managed and are contributory. It is also useful to attempt to initially measure the size of the lesions or hair loss and the time spent engaging in overgrooming; as treatment progresses compare recent estimates to earlier ones to assess treatment success.

What is feline hyperesthesia?

Feline hyperesthesia is a poorly understood condition that has also been referred to as rippling skin syndrome, rolling skin syndrome, or twitchy skin syndrome. It may be a compulsive disorder but it is also possible that there is an underlying medical or neurological cause, behavioral cause or that the problem arises in situations of high arousal or anxiety. The normal response of many cats to having their back scratched can include rippling of the skin,an arched back and varying degrees of vocalization. In hyperesthesia, the affected cat may have a more exaggerated response to touching, rubbing, or scratching of the back. This behavior may then become a compulsive disorder as the frequency increases, the response becomes more intense and the signs begin to appear with little or no apparent stimuli. In addition to rolling skin, muscle spasms and vocalization, the cat may have dilated pupils, and may seem to startle, hallucinate, and dash away. Some cats will defecate as they run away. There may also be some grooming or biting at the flank, tail or back displayed along with the above behaviors.

"In hyperesthesia, the affected cat may have
a more exaggerated response to touching,
rubbing, or scratching of the back."

Behavioral management requires the identification and control of the types of handling that lead to the behavior. Avoiding or minimizing these types of handling, or desensitizing and counter-conditioning techniques so that the cat learns to “tolerate” these stimuli, may be successful at reducing the cat’s level of arousal. Drugs might include those for seizure disorders, antidepressants for compulsive disorders, medication for pain, or anti-anxiety drugs to reduce conflict and anxiety.

What are tail chasing and tail mutilation?

Some cats will chase and even viciously attack their tails. This may arise as a form of play, especially if there is a lack of sufficient routine and stimulation, and may escalate to a more serious problem because of its consequences.

Situations of conflict and anxiety in which the cat becomes highly aroused may lead to displacement behaviors such as tail chasing or over-grooming. Owner attempts to stop the behavior may add to the anxiety and conflict and further aggravate the problem. Regardless of the cause, if the cat manages to catch and bite its own tail the problem may progress to more serious damage and mutilation. The painful and infected tail may have to be amputated but this does not in any way address the underlying motivation for the behavior.

"Situations of conflict and anxiety in which the cat
becomes highly aroused may lead to displacement behaviors
such as tail chasing or overgrooming."

Therefore, in addition to medical treatment to control the infection and pain, and devices to prevent further damage (e.g., E-collar, bandage) behavioral therapy and behavioral drugs for compulsive disorders are likely to be needed. In particular, specific stimuli that precede or incite the tail chasing should be identified so that these situations of conflict can be identified and either prevented or resolved. Normalizing routines, and providing daily interactions and attention are useful in the treatment of tail chasing.

© Copyright 2013 LifeLearn Inc. Used and/or modified with permission under license.