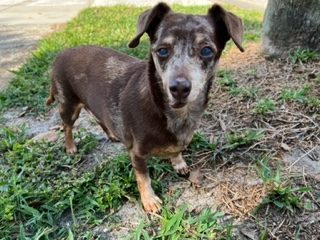 Congratulations to our November 2022 Pet of the Month, Augie Cain!!

“Augie came to live with my husband and me in May 2009 when he was just one year old. We had stopped at a local PetsMart to pick up cat food, and my husband said you have to come over and see the dapple dachshund they have for adoption. I told him we didn’t need another dog as we already had two labs and one dachshund at home. But went to see anyway. I saw Augie trying to make his way out of the crate. We went home without him, but about an hour later, my husband said we had to go back and adopt him.

We took our dachshund, Boris, with us to see if the two of them would get along, We took them outside, and they hit it off! While we were filling out the adoption papers, two other families also wanted to adopt Augie. Guess we were the lucky ones, and it was meant to be!

Augie was found running in Osteen with a pit bull. A lady who owned a farm kept seeing the two dogs together, and she could finally trap Augie in a stall and bring him to a rescue group. The vet neutered him and said he was right at one year old. He was a nightmare when we first got him; he would lift his leg and pee wherever he wanted. I followed him around night and day the first week, putting his leash on him and taking him outside, which began his love of being walked. If he wasn’t doing that, he was standing and clawing at the front door wanting outdoors. I don’t think he was used to being in the house. Who knows how long he had been on his own. He finally settled in but would escape every chance he could. Augie also loved his long walks with Boris, and they both loved car rides.

In November 2010, Augie became ill and had surgery as he had eaten some of his blankets and stuffing out of his toys. This was a scary time for us as he was so lethargic after coming home, but he recovered and no more toys with stuffing. After this, he never liked Dr. Taylor again, and he growled at him every year when he went in for his checkup.

Unfortunately, in March 2019, we had to say goodbye to our 15-year-old Boris. As a result, Augie became very depressed and was just not his usual self. Therefore, in December 2019, we adopted a two-year-old dachshund, Tanner! Augie immediately perked up, and they became best buddies.

At 14, Augie now has some issues with his liver and is blind in both eyes and partially deaf, but he still loves car rides, rolling in the grass, and just lying in the sunshine. We cherish every day we have left with this sweet, gentle boy!” 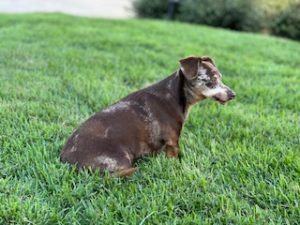 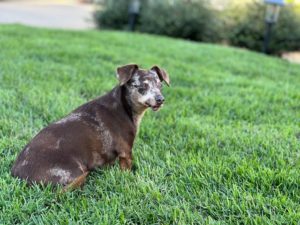