Dudley Osleger-September 2014 Pet of the Month 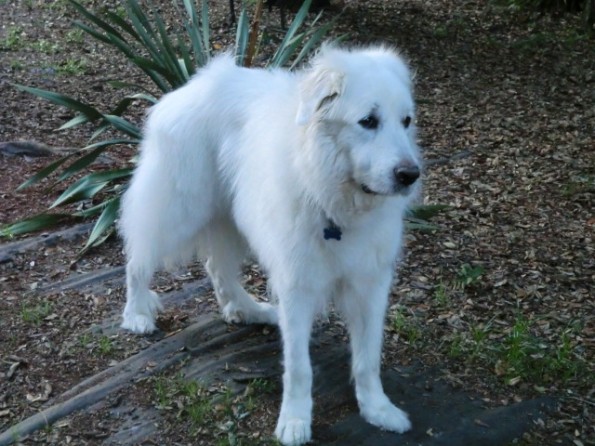 Dudley is one of six members of our FF (furred family), and Dudley is known in our home as “the best dog in the universe”!  We adopted him through Florida Great Pyrenees Rescue shortly after losing our first Pyrenees that we had rescued from Pet Rescue by Judy after he ingested nuts from a sago palm.  We know that Dudley was born 12/18/2003 and was put up for adoption after his original family could no longer care for him.  He came to us on 5/30/2005 and has been nothing but a true joy ever since!  So much so that we adopted our female, Molly, sight unseen, from a “pound” in GA in 2009.  Dudley is the patriarch here.  We also have our sweet “mutt” Martha, adopted through Pet Rescue by Judy when she brought her back from New Orleans after hurricane Katrina.  The alpha male is our 7-pound Yorkie rescue, Riley, who joined the family in 2007.   Add our cats, Nellie, who we adopted in 2000, and our newest addition, Gracie, adopted in July from TOAH and we’re a full house!  Dudley has always welcomed (or at least easily tolerated!) each and every addition. We love them all, but he knows he’s my favorite!!